Roles in the software development project

To develop a successful website, app, or any other software product, you’ll need a team of experienced specialists. However, sometimes people think that it is enough to have the skills of a programmer who knows the technology and is experienced in working on similar projects. The reality is slightly different. The success of a given project depends on the work of a few or even several people playing precise roles in the process.

Development related to a given product usually follows a scrum and agile methodology, which takes place within specific frameworks and needs specialists fulfilling their exact roles. According to them, product development divides into several one-month-long stages, professionally called sprints. Every step needs different professionals who know what to do to obtain a perfect product. So what are theses roles and what are they responsible for in the software development process?

Why is a Project Manager important for developing a new product?

A project manager is a team member present in the project from the very beginning. His task is to coordinate communication and flow of all information between a development team and their client. It is a person responsible for the technical specification of the project, the document without which developers, designers, and testers would not be able to reliably perform their work.

Our role is to maintain comprehensive team management and supervise the created product, but also to understand the client’s needs, ideas, and business goals. We collect necessary materials, conduct design workshops, propose the best solutions, create documentation, build a team, create a proper task schedule, and plan a budget. But still, these are only a part of the project managers’ activities, all taking place at the initial stage of the project. 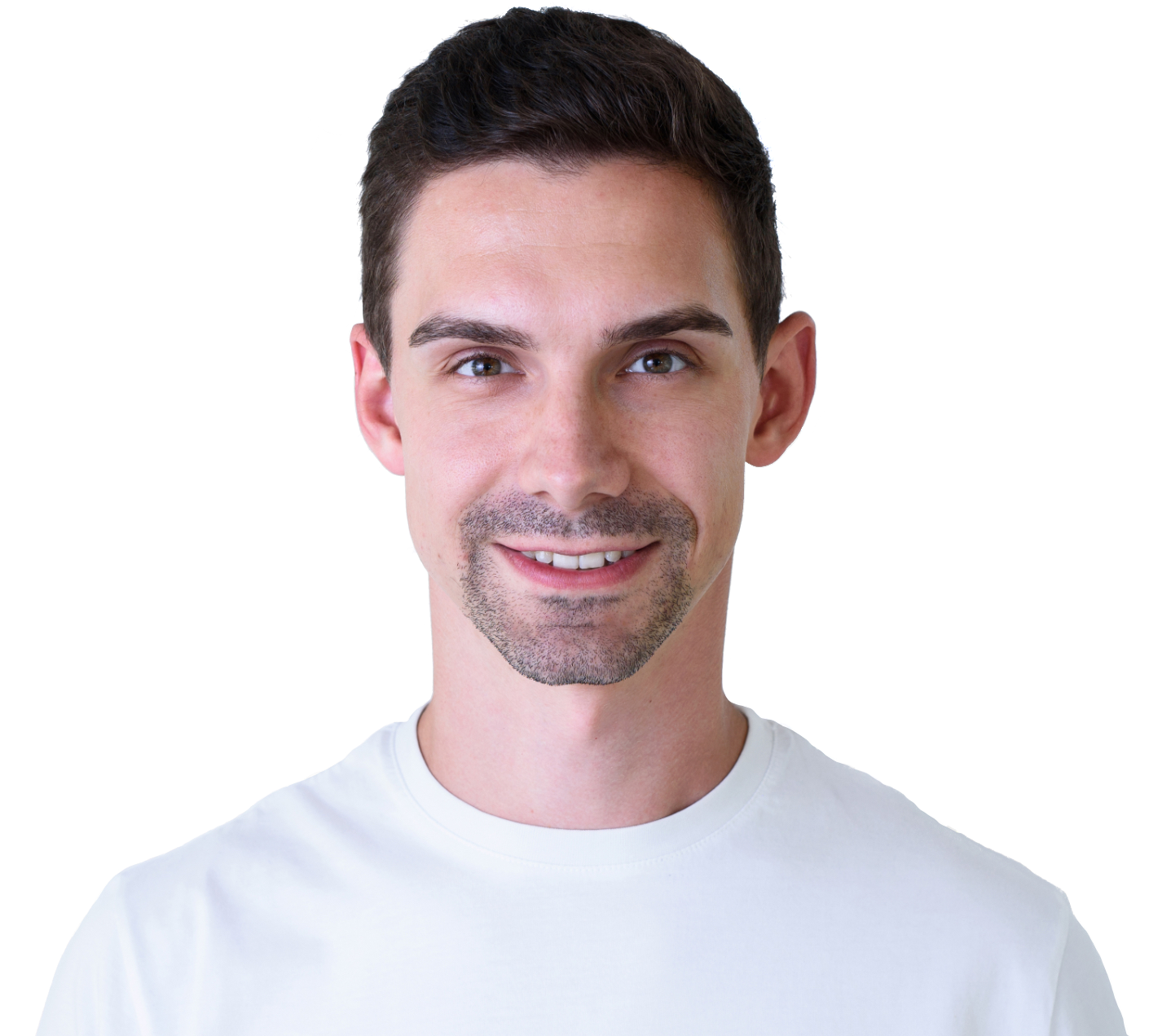 If you’ve ever had a chance to work directly with developers, you probably know that the jargon they use is sometimes incomprehensible. Project managers know it well and are ready to translate all technical information to a language understandable for the client. The project manager is a link between the client and his development team. One of their roles is to make sure that the given functionalities appear in the project within the established timeframe and that the final version of the project is ready to launch according to plan. 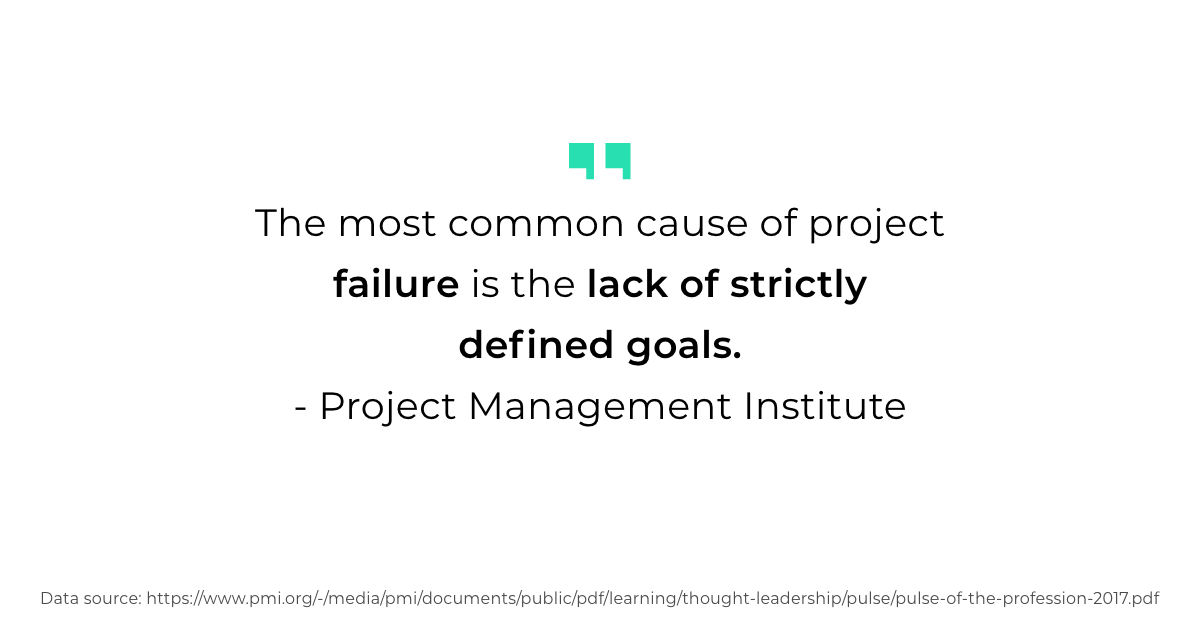 What is the role of UX and UI Designers?

From the very beginning, it is crucial to differentiate the role of UX and UI designers. They have totally different tasks, although sometimes people don’t see that difference at all. Let’s make it clear. A UI designer can be compared to an artist while, on the other hand, UX designer will be a scientist in such a relation. UX designer’s task is to properly design the experience of future users of a website or application, plan and carry out in-depth user research and analyze the competition. Their job is also to create user stories, i.e. stories and scenarios written from the perspective of the user and specific personas. All of this is done so that a potential user is satisfied with the product and behaves in the way we want to. The task of the User Experience designer is to prepare the foundations for the UI designer’s duties. Their job is to create so-called wireframes, which constitute a schematic outline of the project. It is a framework subjected to usability tests, over which UI designers create what the user will see in the future.

As mentioned earlier in the process of software development, UI designers can be called artists who care about the project’s visual and aesthetic qualities. Their roles are to follow the guidelines set by the UX designer and take care of the product aesthetics. Summing up the relationship and cooperation between UX and UI designers can be compared to home design. In this case, UX designer will be an architect who designs the house, ensuring it meets it’s functionality and serves the householder precisely as they need it. On the other hand, the UI designer is an interior architect who makes sure that the house is beautiful and that the use of each room designed is associated with a pleasant visual feeling. Without an interior designer, the design of the house itself would be raw and unsightly. The same would happen if only the UX designer was involved in the visual design process.

What are the roles of development team members?

Back-end developers are specialists who program what is hidden “behind” in software products. They are responsible for elements invisible to the user.

It is difficult to see the work of back-end developers with the naked eye. They don’t design the visual layer visible to the user. All of their roles require knowledge of algorithms and software optimization. What exactly do they do? The effects of their work and role in the project are best illustrated by using an example. Let’s assume that you are just making a routine bank transfer. For the operation to be successful, there must be several operations performed in the bank application, which are not visible to the naked eye. What are these operations? The system must verify your account – check if you have enough funds to make the transfer. Then find out if the account, to which the transfer is to be made, really exists, and finally do what you care about the most – transfer the money to the place you want it to go. All these operations take place in the back-end. Therefore, it is safe to say that back-end developers build the foundation for every software product. 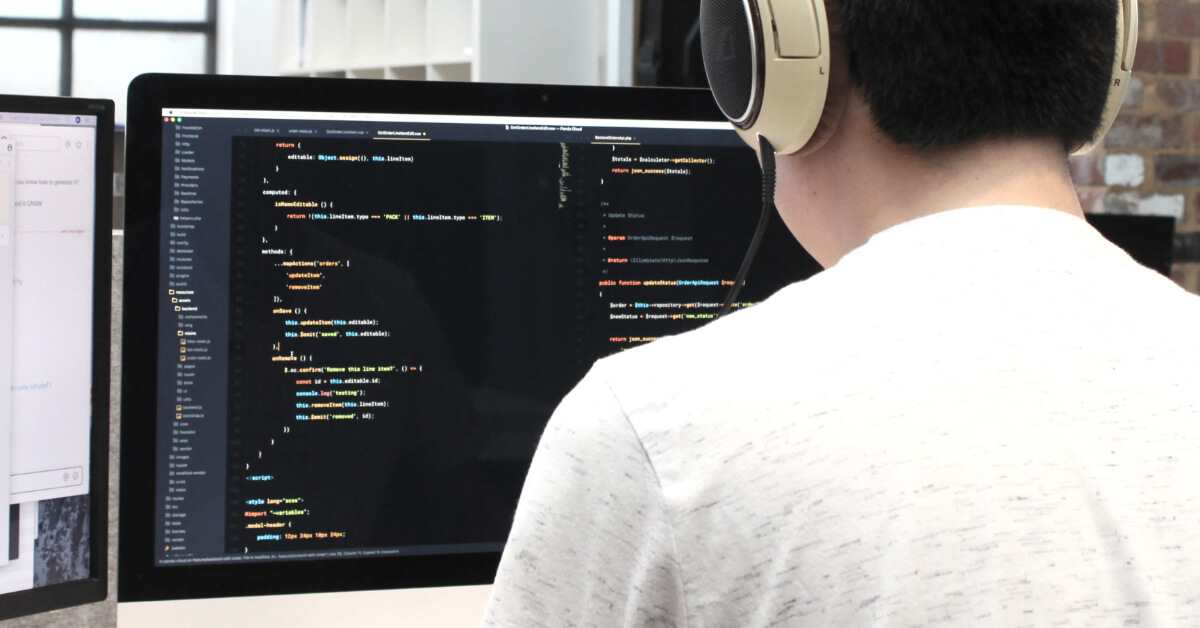 Photo by True Agency on Unsplash

The back-end developers take care of everything that is not visible on the website or in the application. In contrast, the front-end developers’ roles are slightly different. They are responsible for everything the user sees. They develop complex user interfaces, interactions, application features, and animations that enhance the visual layer of the product.

The front-end developer is a member of the team responsible for the visual environment of the project. Their work is not limited only to programming and connects with close cooperation with designers. Compared to backend developers, frontend devs often encounter problems that require them to combine and balance the visual sphere with the project’s technical capabilities.

While searching for information about roles in the software development project, you might have stumbled upon the term “full-stack developers.” What are they responsible for? It would be best to define such a developer as a person who smoothly moves on all technological layers of the software project. This means that it is a team member who can handle backend and frontend development, administer the server, database, and everything else that may be needed in a software development process. Full-stack Developer should cope with designing, coding, debugging, implementing, and maintaining a complete web application. 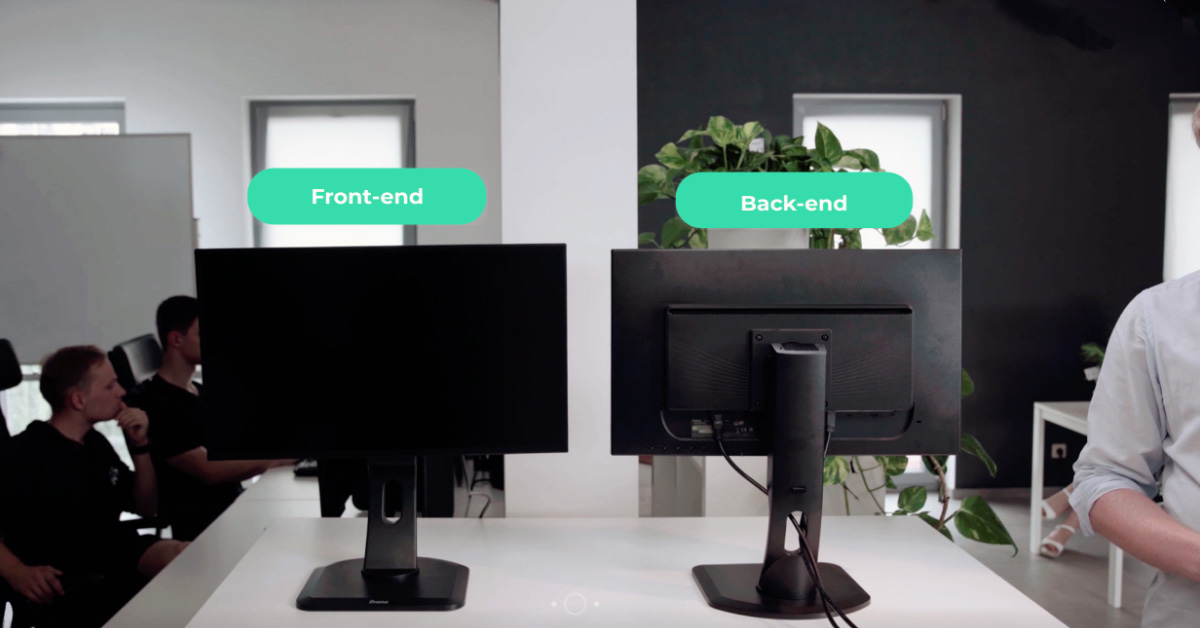 If you decide to create an app, it must work on mobile devices. And according to the fact that the vast majority of mobile device users can be divided into those using iOS and Android, then your app must work properly on both devices.

iOS and Android developers are software developers responsible for also designing and preparing apps for iPad and mobile devices with Android software. Their main task is to encode mobile applications and, at the same time, take ensure highest quality while maintaining the assumptions and capabilities established by the client and project manager at the beginning of cooperation.

Do you want to find out more about how we work?

Why do you need experts responsible for a product analysis in a software project?

The implementation of a new product or the modification of an existing one should entail a thorough market investigation demonstrating the potential and capacity for development in the current market situation. The analysis of these factors is possible thanks to the extensive knowledge and experience of project managers and UX designers who perform market research in cooperation with both developers and users. All this is done so that the planned implementation of a new product on the market is successful, and the offered solution responds to users’ problems and motivates them to use this particular solution.

At Applover, each project starts with a series of workshops in which the following people: project manager, UX designer, developers, and client take part. All of them have different and very specific roles during such a process. During such meetings, we discuss not only the goals, functionality, and product specification but also the environment and all issues related to it’s entry on the market. Such actions are essential to ensure that the project meets its objectives, and responds to the real needs of the customers, motivating them to choose this particular solution.

What is the quality assurance division responsible for?

The task of the quality assurance team is to ensure the highest quality of the final product. The created product – website, web, or mobile application – must be thoroughly tested before it is launched on the market. It is essential to ensure that each of the intended functionalities works exactly as it was intended in the beginning. However, I can safely say that quality assurance is a much broader issue than just testing. The testing process includes a whole range of activities that need to be planned and performed to achieve the highest possible quality level. Of course, every project can be closed without testing, but in such a situation, it will do so with high business risk and project failure right at the start. Reliable solution testing prevents the loss of first-users who could come across a non-functioning product that does not perform the expected functions and does not solve their problems.

The task of the testers, who constitute the quality assurance team in each of the projects, is to select the appropriate tools for reliable testing of a specific product. Quality assurance team co-create the project from the beginning when other team members start working on it. One of the initial tasks is to analyze the specification and verify whether a given solution is valid for a specific project. At the last stage, the quality assurance department checks the final product compliance with the initial arrangements made by the project manager and the customer. It can be said that testers are a team of quality guardians of products manufactured by developers and assumptions relevant to the customer.

Our tasks include comprehensive team
management, supervising the created product, communication, and taking care of customer relations. Project Manager’s job starts long before the proper programming work. Why? Because according to software development projects, it is the initial stage that is usually crucial for
successful project implementation. 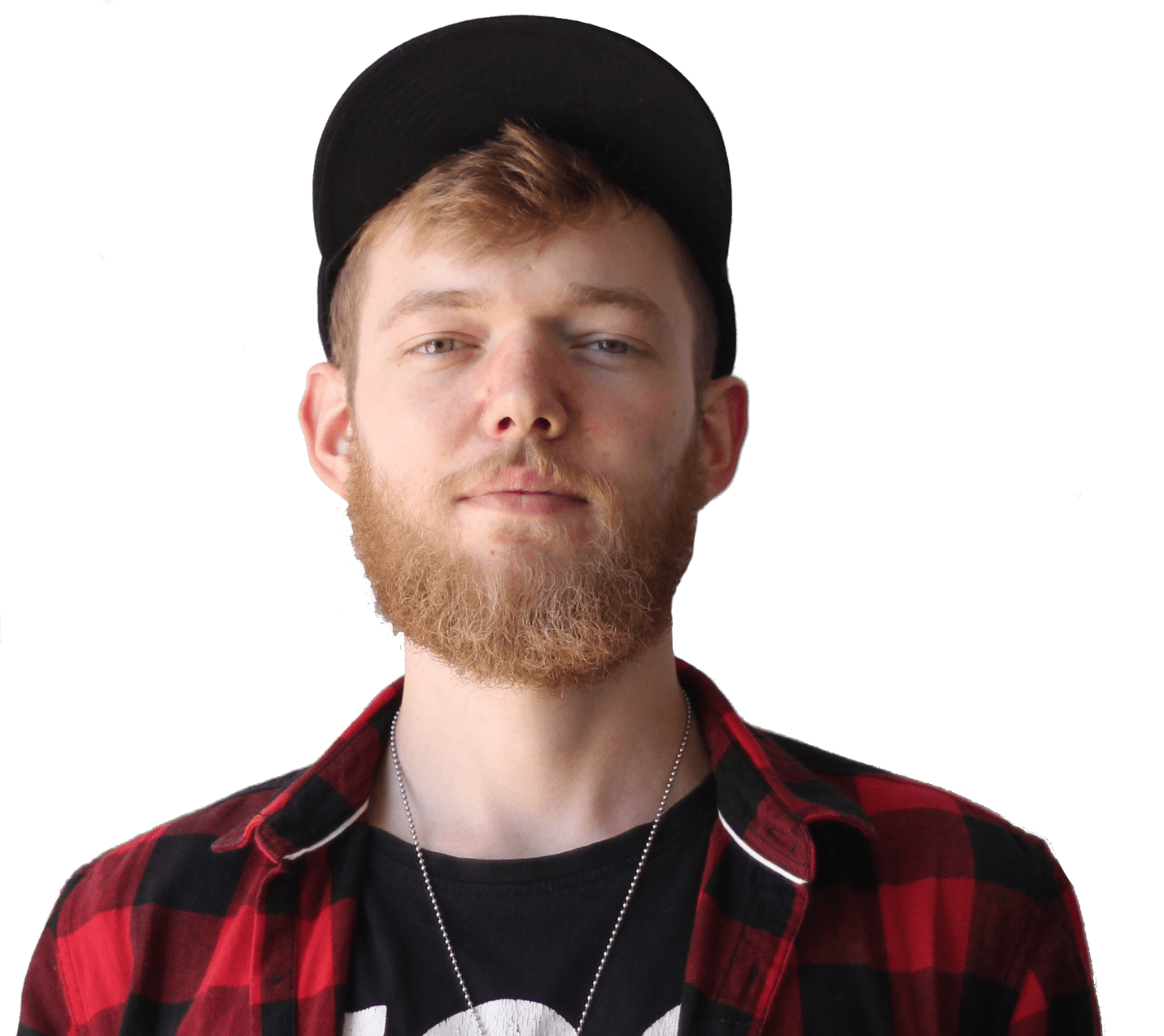 Why it’s good to cooperate with all of these specialists in a software development project?

High-quality software development requires appropriate collaboration between experienced experts who specialize in its specific stages. The team working on the development of a digital project is like a machine that works fine only when all the elements remain in place. Therefore, it is tough to achieve the desired effect by working with only one person responsible for the development, appearance of the product, in-depth testing, and project management.

If you want, you can read more about how we work in our Process Book.